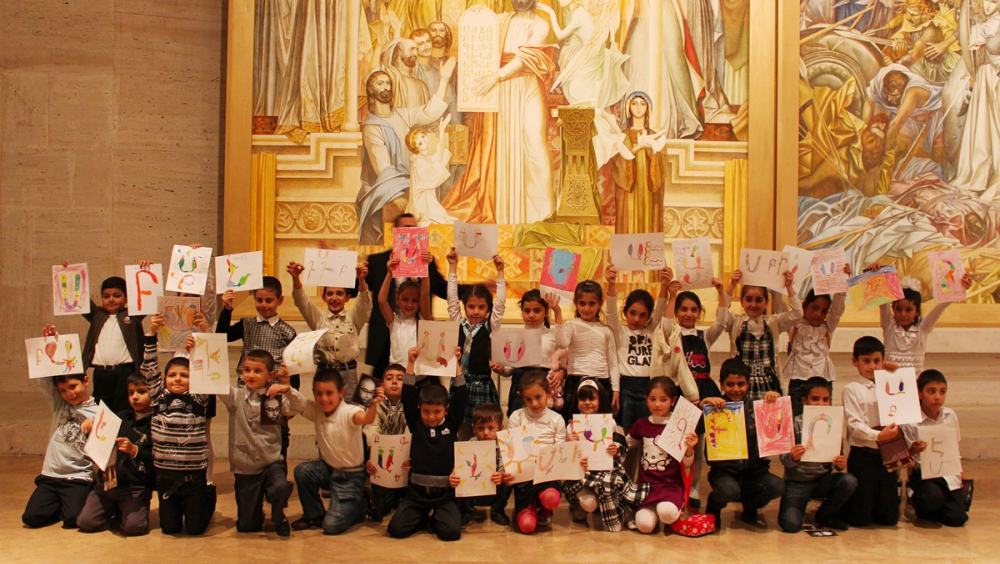 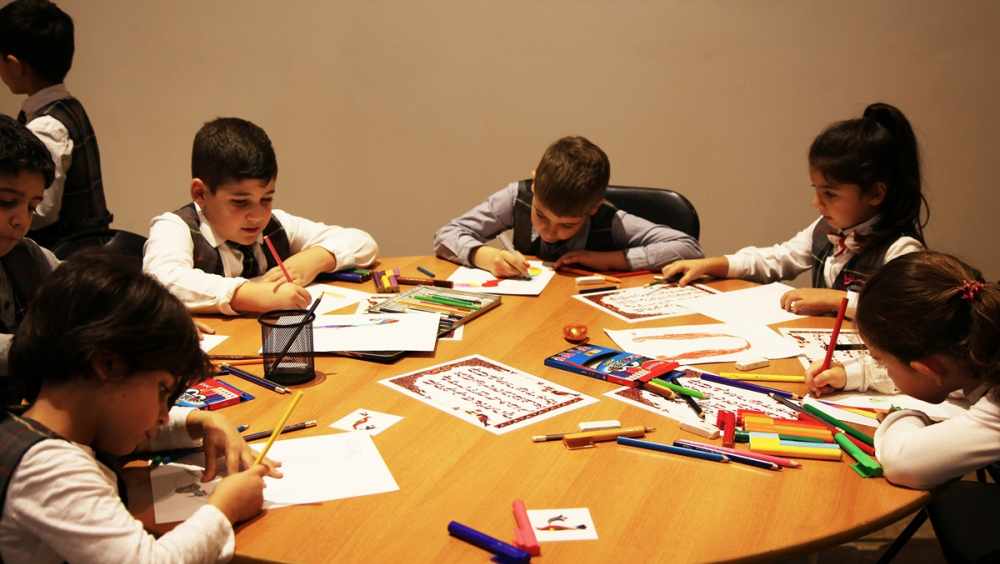 The Calligraphy of Heritage


“… And he neither sees dreams when asleep, nor visions when awake, but in the factory of his heart, his eyes see a right hand, writing on stone, leaving traces on it as if on snow. And he did not only see it but all the details gathered in his mind as if in a plate… ”

The Cafesjian Center for the Arts (CCA) had the oportunity to take part in the “European Heritage Day Stories” initiative in 2020 with the Following Sasuntsi Davit -- the Symbol of Liberty article.

Our new story is dedicated to Armenian scripts and the educational program centered on them.

Back in the 1980s, when the Cascade complex was still under construction and would become the Cafesjian Center for the Arts in the future, painter Grigor Khanjyan was invited to paint in one of the galleries. That gallery would later be named in honor of the great painter. There, Khanjyan worked for eight years (1992-2000) until his death, creating a monumental triptych mural that depicted the three significant events in Armenian history, including the invention of the “Armenian Alphabet.”

Since its opening in 2009, the Cafesjian Center for the Arts, loyal to its mission, presents unique works of modern art, organizes lectures, film screenings, concerts and educational programs. “My Armenian Alphabet” educational program was introduced in 2011, based on Grigor Khanjyan’s famous mural. The program is designed for school children in grades 1-4 and families.

In the two-part program, participants get acquainted with Khanjyan’s mural, paying special attention to the “Armenian Alphabet” part, which celebrates the invention of the Armenian script. We try to help children imagine the 5th century – the period when the Armenian alphabet was invented – so they can accurately assess the historical context and the importance of this significant achievement.

In the narratively saturated mural, the great illuminator of the Armenian culture, Mashtots, is depicted as a saint, surrounded by both ecclesiastic and state figures, such as Catholicos Sahak Partev and King Vramshapuh. In his hands, Mashtots is holding the alphabet, thus giving his holy promise to the people, while the Catholicos blesses the people with one hand and holds the Bible’s Armenian translation in the other, with the famous “‘Let there be light’ and there was light” words on it. And indeed, the invention of the Armenian alphabet spread a new light for the Armenian people, and it is exactly this concept that we value and want to pass to the participants of our educational program.

The history of Khanjyan’s mural and the details, as well as the historical-artistic significance of the “Armenian Alphabet” part, are presented interactively through a Q&A session. Afterward, the participants move to the mesmerizing world of letters.

The participants learn, in great detail, how the first handwritten books were created, what the main types of Armenian scripts were, and also about ornamental scripts, particularly bird-shaped letters (trchnagir in Armenian).

In the second part of the program, participants start the creative process in the unique atmosphere of Khanjyan Gallery. Having examples of bird-shaped letters with their initials, participants create their own versions with new colors and interpretations. We have a beautiful tradition of taking a collective photograph of participants with their bird-shaped letters in front of “Armenian Alphabet” mural. This symbolically includes Mashtots, the inventor of the Armenian alphabet, in the whole process.

Through “My Armenian Alphabet” educational program, we try to create a discourse around multiple educational issues, such as: developing historical consciousness of participants; promoting interest toward the history and identity of the Armenian nation; nurturing a mindful treatment of historical-cultural legacy; and, of course, advancing the culture of museum education, which is one of the main objectives of CCA’s educational programs.

Within the scope of the educational program, CCA effectively collaborates with almost all schools in Yerevan and the regions of Armenia.

“My Armenian Alphabet” is quite popular and is especially active during spring, when first-graders finish learning the alphabet, as intended by school syllabi.

With time, CCA extended its educational audience, considering the interest tourists had regarding Girgor Khanjyan’s mural and especially the Armenian scripts. In this case, obviously, many specifications of the participants were considered, including educational level and age.

This important cultural event inspired us to create and implement new programs, reinventing the cultural heritage passed on to us through the centuries.

In 2021, the European Heritage Days were celebrated on September 25-26, titled “Inclusive Heritage!” The Cafesjian Center for the Arts presented a rich program of events, implementing curatorial tours and unique educational programs. One of those programs was “My Armenian Alphabet”, and the participants were representatives of racial minorities living in Armenia – Assyrians and Molokans.

European Heritage Days have been celebrated at CCA since the Center’s opening. In 2019, the Ministry of Education, Science, Culture, and Sport of the Republic of Armenia acknowledged the Cafesjian Center for the Arts with a Certificate of Gratitude with regard to its programming for the European Heritage Days.

The Cafesjian Center for the Arts is dedicated to bringing the best of contemporary art to Armenia and presenting the best of Armenian culture to the world. Having celebrated its grand opening in November 2009, CCA continues to exhibit unique works of modern art, offers a wide variety of exhibitions and a diverse program of lectures, films, concerts and numerous educational initiatives for children and adults. Annual visitation of the Cafesjian Center for the Arts exceeds 1,000,000 people.