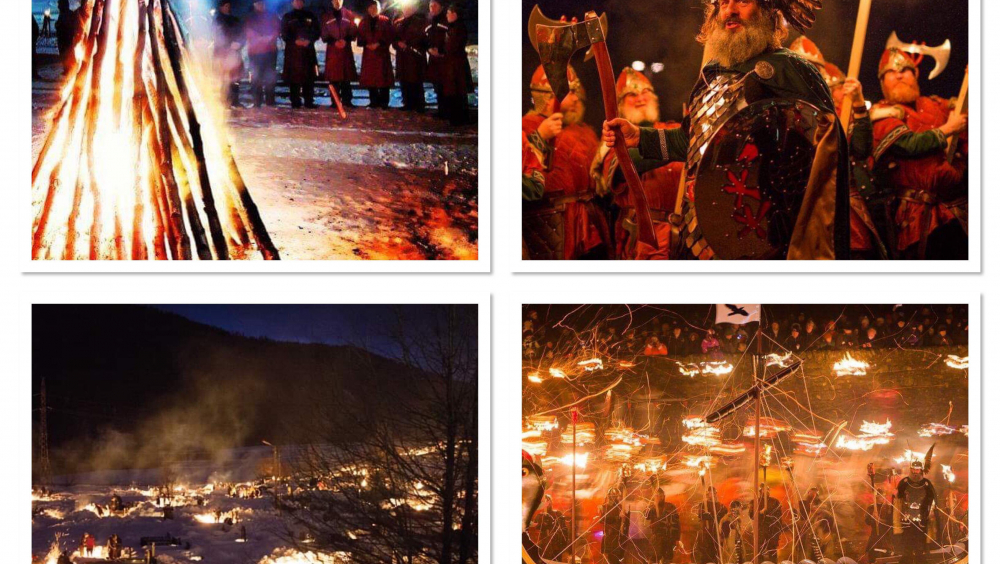 Lamproba and Up Helly Aa Festival


Traditional holidays are an important part of the cultural heritage. It was a great discovery for me that there are 2 festivals bearing a torch in Europe that have many similarities. The first festival is Lamproba in Svaneti (Georgia) and second one is Up Helly Aa Festival, which is celebrated in distant Scotland in the Scottish islands in honor of Vikings. The similarity is that we – Svans and Vikings are the ancient warrior people. Both festivals are held in winter. The main attribute of this tradition is the torch (lamp). In the event of both festivals, people dressed in national clothes arrange the march in the streets and both of these celebrations are dedicated to the memory of their ancestors. Scottish celebration is the imitation of the warrior Viking funeral, and in Lamproba in Svaneti, people go to the graves and warming the spirits of their dead ancestors. It should be noted that the Scots, as Svans, are the followers of ancient traditions. Let’s now specify each festival that we mentioned. Lamproba is a celebration of past glory and hope for the future. This holiday is movable and celebrated 10 weeks before Easter, usually in mid-February and is devoted to Saint George as a heavenly patron of Georgia. In Old New Year every family is cutting off the birch tree, felling them and arranging it the whole month to make it dry. Why the birch tree? According to the tradition, the robbers chased Christ. He was defended by the birch tree from the evil of the road. The branches were dropped and the savior was sheltered. Christ blessed the tree and promised to use it for the sake to remember human soul. They lighting the lamp (torch) from pre-made birch tree and dried branches. According to the tradition, each Svan family taking out the number of lamps with regard to the number of man they have in family. Centuries ago, they count the man in the family in that way and inquired how many potential warriors could be brought out when needed. Men dressed in national clothes organize the march in the direction of the church with a torch and performance of songs in Svan language. They scatter lamps side by side other in the yard of church and the bonfire starts. The festival meal is arranging around the bonfire, they pray and make toasts. On Lamproba night the graves are flooded with light. They light heavenly way to the soul of the dead on this day. A similar festival with torches is carried out in Scotland. Every year, in the last Tuesday of January, the main town of the islands of Scotland celebrate the festival called Up Helly Aa. It is strange that Scotland celebrates this festival in honor of Vikings, since Norman was attacking to Scotland from IX century, although Scotland is proud of their own strange history and they pay their debts to their ancestors by celebrating with this festival. Vikings’ huge ship – Dracar – is preparing specially for this day, and the local population dressed in Viking clothes will be taken the ship to the city streets. Everyone is participating in the march. Participants take hold of axes and torches. At the end of the march, Vikings throw torches in the Dracar and fire the ship. When the ship will be burned thoroughly, the crowd sings the song called The Norsemans Home. In this manner, Vikings say farewell to thei dead fighters on the last road. Because of this ritual, Up Helly Aa Festival is also called “Festival with Torch.” The uniqueness of Svaneti’s festival - Lamproba is reflected in the fact that it was carried out in ancient Georgia and this time it is preserved only in Svaneti. The will of Giorgi Chkondideli to the King David Aghmashenebeli is known: “Walk with two faith: with belief and traditions of the ancestors!” The main wealth of European culture is its diversity. The cultural heritage of Georgia as a part of Europe is an European cultural heritage. I found that European cultural heritage is diversified. Many European festivals, in the same way and different contents or vice versa, take place in one of the distinctly different countries. We all have different past, but what unites us is a special attitude and appreciation for this past, so we are proud of our history. This is the main European value!