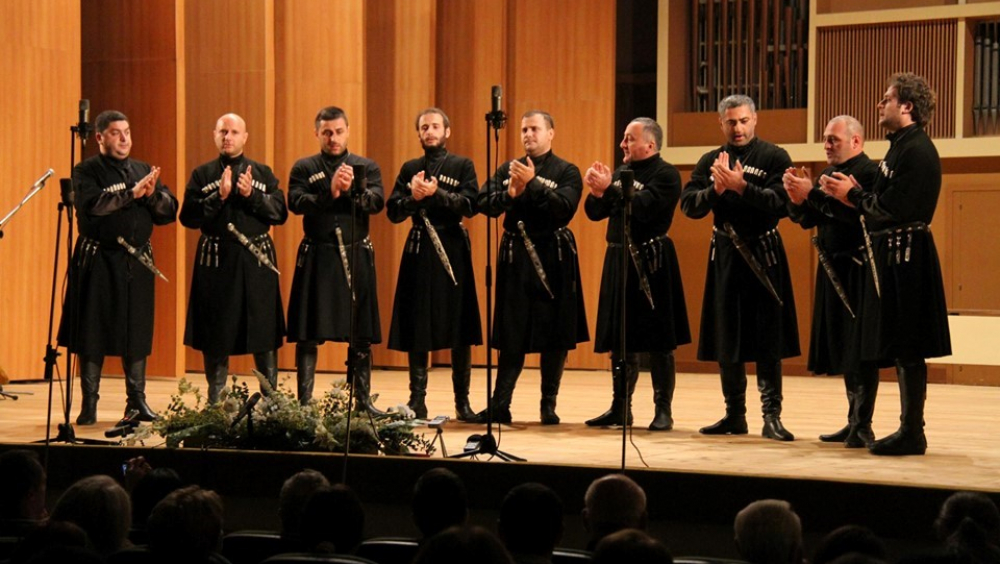 
Georgia is a country with centuries-old history. The Kartvelian tribes lived in its territory from immemorial time. Georgian nation has withstood all the challenges and save the elements of national identity, which are: language, unique script, original architecture, folklore (including literature, music, dance) and etc. In different times and for various purposes many Europeans traveled to Georgia and gave a place to impressions about the country in their work. Among them were French Jean Chardin, Italian Teramo Cristoforo Castelli, Frenchs, Jacques François Gamba, Alexandre Dumas and others; Greatly contributed in the development of Georgian-European cultural relations British Oliver and Marjory Wardrops, German Arthur Leist, about who Ilia Chavchavadze said: "Arthur Leist is a man who has taken responsibility to be mediator between us and Europe". Georgian culture, which was considered as a unique phenomenon of the Christian East by the first president of Georgia Zviad Gamsakhurdia, is a diverse and original and, at the same time, it has European roots that gives it special significance in terms of European integration. It has evolved over the centuries, in difficult and interesting historical conditions, on the boundary of the east and west civilizations, rich traditions and strong national identity. The ancient Georgian literary, historical and religious texts are created in a unique Georgian script. Georgian culture developed along with the history of the country, this ensured a strong national identity that helped to preserve Georgia's uniqueness, despite the numerous attempts at different times and invaders to assimilate and even to disappear it. However, the uniqueness of the Georgian culture does not exclude certain similarities in some areas of culture of European countries, which we think once again underlines the fact that Georgia is part of European civilization. For example, we can discuss some aspects of Georgian and European polyphony. Polyphony is the simultaneous sound of two or more independent, functionally equitable melodies. Polyphonic music is characterized by intellectualism, artistic and specific generalization, objectivity, and by one impulse nature. It is characterized by the continuous development of musical material and the maintenance of initial character. There are three types of polyphony in Georgia. We can find similarities between Georgian polyphony and European culture. In this regard we should pay attention western Georgia, especially to one particular characteristic of Gurian (Guria -historical region of Georgia) folk songs. This is a specific technique of singing, which is called “Krimanchuli” in Georgia. This style of singing is often compared to Alpine Yodeling. There is no doubt about the similarities between these two phenomenon, both have sharp changes between the chest register and the head register, tendency of leaping with big intervals and the typical legato technique. Alpine Yodeling and Georgian polyphonic songs have emerged for different purposes. In ancient times shepherds were called a herd or communicated with alpine villages with Yodeling, but today it is part of the traditional music of Switzerland. Over the centuries, Georgians have created songs for everyday life and transmitted to the posterity orally. Today, the Georgian polyphonic song is recognized as the masterpiece of the oral and intangible heritage of mankind by the UNESCO. “Chakrulo” - Georgian (mostly is sung in Kartl-Kakheti regions) Classical, Choral, Polyphonic, “Suphruli” Song (song traditionally sung at table). It is one of the classical examples of Bourdon polyphony. The automatic interplanetary probes “Voyager 1” and “Voyager 2” released in 1977, included two identical gramophone disks with records of "Earth's Voices", among them was “Chakrulo”. Sometimes Georgian songs are performed as follows: The singers are divided into two groups, only accentors are in one and in the other united the whole choir. Both groups are singing the song in rotation. So here we have a strange analogy of the multi-choir style that is known to us in the high Renaissance and early Baroque polyphonic style, but a significant difference between these two styles is that this multi-choir performance in Georgia was created on a basis of clear folklore. One of these songs is "Odoya". It is a remarkable fact that there is a great similarity between Georgian and Corsican folk songs. The similarity is so great that the listener cannot even distinguish between these two. Among the researchers there was a great surprise because of the similarity, connection and parallels of the Georgian polyphony with the medieval European polyphony. The existence of such connections can be explained by the fact that Georgia was a member of the Christian unity from the fourth century and for many centuries it had a clear Western (European) orientation. The star of former prime minister of Georgia Zurab Zhvania was opened in Strasbourg, in front of the Council of Europe Palace. On the star, with Zurab Zhvania's name and surname on it, is carved out one of the most famous phrase of the politician – “I am Georgian and therefore I am European.” All these point to a strong Georgian-European relationship.