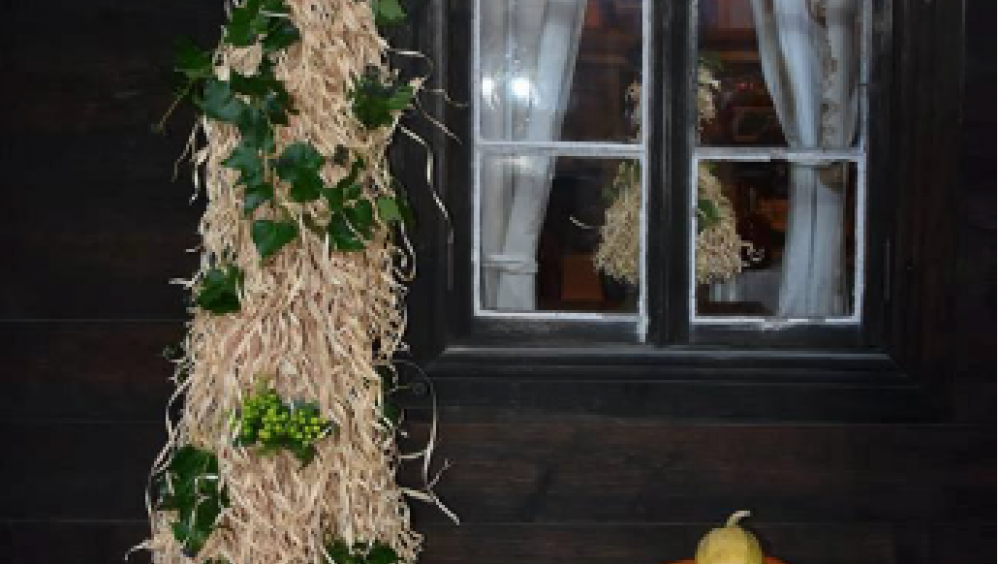 The world celebrates New Year once a year, but Orthodox Christians celebrating it twice – in the 1st and 14th of January (old and new style). January 14th was celebrated differently in various regions of Geogia, which has become tradition for centuries. Old New Year was called Kalanda by Gurians. It coincides with the day of fiesta of St. Great Basil – the biggest saint of Christian World. The main attribute of Kalanda is the thing called Chichilaki, which is made by thick stick of hazelnut tree. Chichilaki’s second name is Basil’s Fluffy Beard. As I mentioned, the main attribute of Kalanda is Chichilaki, Kalanda’s Sun beam is tree shavings of Chichilaki (today it is considered as St. Basil’s Beard), as for the Chichilaki, it represents the Sun itself. Sometimes they used to make 2 meters height Chichilaki in Guria, which had the cross and at the bottom it had plush (Gurians also know that plush was covering Dionysus by one of the God of Olympus, to shield from enemies’ fire). The plush which was entwined around Chichilaki was the symbol of bringing freshness and life in the family. The pig intended to Kalanda has placed in special area and it is well-fed. And that is a guarantee that the Kalanda festive meal will be very tasty and delicious. Gurians say - no matter how dry the winter is, there is going to be a snow on Old New Year. And it is true! Snow is always falling on the night of 13th of January and Kalanda - true New Year begins. Before the night of Kalanda begins they choose hornbeam tree for fire and on January 13, they will light the fire in fireplace with this tree. Until the gunfire at 12 o’clock, there is only the sound of dog’s barking and crackling of firewood in the village. And Kalanda is coming with the Chichilaki in a small Guria, which is surrounded by mountains. Kalanda is Latin word and it means the first day of New Year. The phrases: Kalanda Bread and Wine, Kalanda Pig, Pig’s Jaw are related to the festival of Kalanda. In older times, sortly before Kalanda begins, the whole family must stand up. Men used to went is cellar with bowl with New Year’s groceries in it, decorated Chichilaki and an empty clay jar for wine. The celler was deemed as holy place. There was ecclesiastical and secular wine in the large (buried) wine jars, called Churi. All wine jars (Churi) had their name – for Virgin Mary, for St. George, for Festivals, for daily use, for Kalanda and etc. Guria was the mother of wine, after Kakheti. There was 59 wine breed in Guria, including Klarjetuli, from Tao-Klarjeti, which’s cluster of grape weighted 1 kilogram (several breeds are still preserved). When the head of the family went in celler he silently puts the bowl in the ground, fills clay jar with wine, kneeled down and asked St. Basil for happiness in his family. Then Mekvle (the first visitor of the family in New Year) would pick up a walnut from the clay jar and ask St. Basil to fill the family with kindness as the walnut is filled with itself. They broke walnut and if it was empty, the Mekvle would once again ask St. Basil not to resemble the family to an empty walnut. Then the process would go to the house. Mekvle would knock on the door three times with the words: “open the door,” and they would answer three times from the house: “what did you bring?” Mekvle would list the things in reply: “I brought peace, God’s mercy and everything good, Adesa (black grape breed), Janjukha (string of hazel-nuts or almonds dipped in thickened grape juice and maize flour), Khachapuri (Georgian traditional dish: pastry with cheese filling), sweets…” Then the door would open and New Year’s greetings started. Kuchkha is the second day of Kalanda. According to the oldest tradition, they choose the person called Pekhadi who would setting foot first after midnight, who would bring the present and shot from the gun and fires the fireplace and etc. to bring happiness in the family for ever. Christmas round loaf is traditional Gurian Khachapuri, which is baked on January 7th or January 14th, during Kalandoba. Gurian round loaf is not only Khachapuri. Its whole mystery is that Gurians putting boiled egg in it with cheese. It has the form of the Moon. Gurians believed that it was a symbol of the celestial bodies and of strength. Christmas round loaf was baked on earthenware vessel, on red live coals. This tradition of welcoming the New Year in Guria belongs to the monument of intangible cultural heritage, it is unique for our cultural environment. This tradition will be passed from generation to generation and I think it is an important factor for our culture. For instance, Gurian Chichilaki, its analog in Europe is Christmas Tree, that spreads from XVI century, from German tradition. From the beginning it was beech branches and then it replaced with the Christmas Tree. The celebration of the New Year in January in Georgia begins from XIV century. For me, European heritage is a unique part of culture that shows that we are part of a united European civilization.