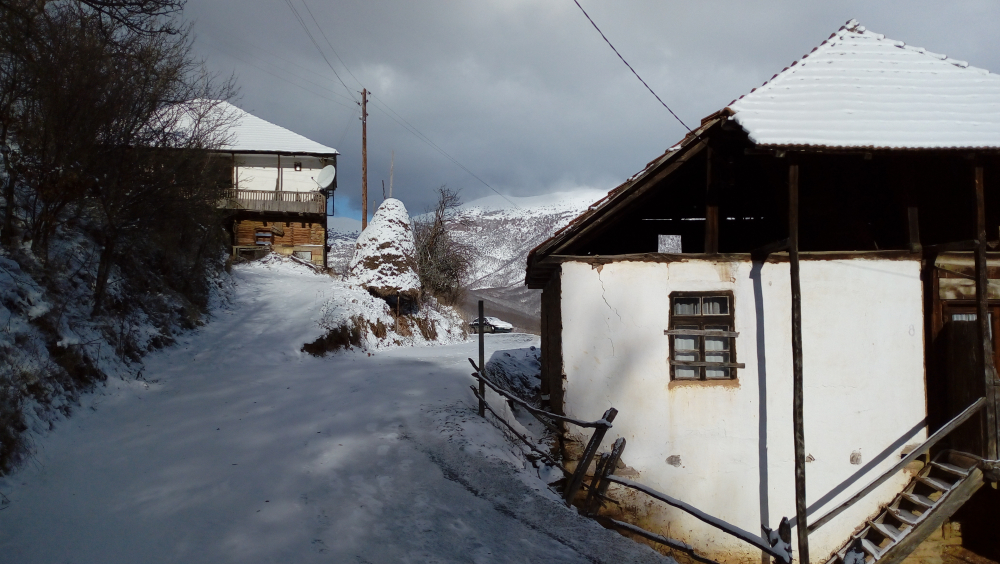 
The story follows the rituals, customs and traditions around Vodici (Baptism of Jesus) in Zagrad, a small village in North Macedonia. It is one of the most important holidays in the Orthodox church and it's marked by celebrations all over the country. In Zagrad, it lasts three days, and it represents a community-centric holiday, where families, friends, and strangers, all come together to celebrate the Baptism of Jesus Christ. It's a time where families have an opportunity to reconnect with their cultural heritage and pass down sacred traditions to their descendants.

Vodici, also known as Bogojavlenie, is recognized as one of the three major religious holidays in North Macedonia, besides Easter and Christmas. We celebrate the day St John the Baptist baptized Jesus Christ in the Jordan River, which according to the Julian calendar, takes place every year from January 17 to 19, and even the 20th in some regions.

Although the most popular and televised rituals are held on January 19 in Skopje and Ohrid, where priests perform the Great Blessing of Waters on a holy cross before throwing it in a river or a lake. Some men then jump into the cold water and try to return it to the priest for good luck all year round. Other cities and villages in North Macedonia have their own customs and rituals – also known as adeti on Vodici - that are all unique in their own ways. We even have the saying – hundred villages, hundred adeti.

The village of my ancestors, Zagrad, is one of the oldest in the Poreče region, hidden away in the gorgeous mountainous region of Suva Gora. Once a vibrant community, today it is mainly deserted, and chances are you won’t find it on a map.

But, during the holy days of January, it comes to life again. The descendants of those who once lived here come to celebrate Vodici, following the same set of traditions (adeti) as their ancestors did hundreds of years ago.

The first official adet takes place on January 17 in the house of the village godfather (kum). It’s a crucial role for the assigned every year, passing from one household to another in the village. In the afternoon, the cross and the small iron cauldron are decorated with bouquets of basil, wrapped in red-white yarn.

Two women of the godfather’s family do the ritual, while the rest of the family sings old Church Slavonic songs.

It’s worth noting that the ritual needs to be finished before nightfall. After dark, the village godfather ( kum ) chooses five men from the village to accompany him to the monastery in Manastirec where the priest awaits them to bless the cross and the water along with other villagers from the region.

The monastery offers a feast for everyone. The best part is people come together around the long oak table, and sing traditional songs, chat and dance until midnight. After midnight, the priest enters the church that is bathed in shimmering light against the dark night while the godfathers leave their cauldrons together with the crosses. The priest holds a liturgy, prays and blesses the water in the cauldrons. After the liturgy is finished, the festivities continue, everyone sings and dances till dawn in the courtyard.

Back in the village, just as the sun rises above the mountain, the godmother bakes bread and lean pastries, boils lean beans and prepares seasonal salad among other tasty dishes for the guests. Of course, she isn’t all alone in the kitchen. Most relatives, family and friends help out and do the final preparations before the big celebration.

Then, the godfather leads the men throughout the village to all the houses, where he blesses every home with holy water and the above-mentioned prayer.

The next morning the godfather goes to church with the cauldron and the cross to pray. There he greets all the families on the doorstep of the church that receive a blessing when they leave the church and the holy water. Most carry bottles for the water, so they can bring it back to their homes.

The day ends with festivities, there’s music, food, cakes, and traditional songs. The next day, the godfather again goes to church in the morning where he blesses everyone with holy water from the cauldron in the church.


The story’s European Dimension is found in the engagement of the community, people-centric activities which include children, senior citizens, and visitors. The celebrations offer a valuable link between the history, traditions, and folklore of Zagrad and Macedonia. It also promotes important values like generosity, intergenerational connections, and sustainable rural development. For this reason, our idea is to invite everyone who wants to participate in the yearly traditions and learn about the important Macedonian cultural heritage in Zagrad. The promotion of the celebrations during this holiday can become a way to stimulate rural tourism and to promote the cultural heritage of the region.