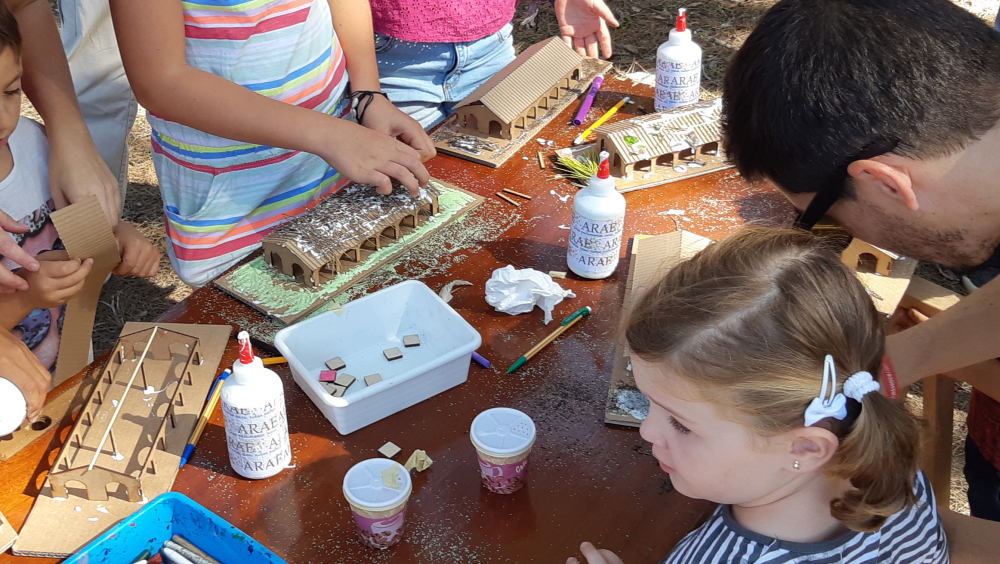 
One of the traditions of our country are the grapes of the New Year's Eve. But the grapes also hide a tradition in the Levantine coast: the production of the raisin grapes and its unique riuraus (constructions) that protect them. For several years, ARAE Heritage for children has collaborated with numerous cultural associations that organize the traditional escaldà de la pansa (blanching the grape) every fall period. In the workshop we have developed, year after year, activities for children about ethnological and intangible heritage that frames this traditional process of transformation of grapes in rural areas.

The riurau Mas del Fondo in Massarrochos (Valencia, Spain) was built XVIII-XIX century and is concerned with the cultivation of the vineyard. The function of this vernacular construction was to deposit the raisins during the ancestral process of drying. This traditional process used to begin, after the harvest. The grapes undergo during a few minutes this blanching (escaldà) in a cauldron. The grapes are then spread onto reed beds (canyisos) that are left out under the sun to dry up. The rirurau construction was important in the area of l'Horta in the nineteenth century, to protect the grape raisin from the moisture of the night and possible rains, demonstrating their ethnological values. Another peculiarity is that Mas de Fondo is considered the largest riurau in the world. On all three occasions we have complemented the workshop with a didactic workshop about the riurau and the escaldà process. The teaching material is based on traditional constructions, crafts and construction methods connected with riuraus and the associated escaldà process. The first two editions we have worked on the singularity construction of riuraus. With the models construction (at two different scales) we have worked the importance of the sequencing of arcades and simplicity of the construction, emphasizing the functionality of the system. The landscape encompassing the historical and ethnological process was also worked on. In the last of the editions, the one of 2019, we focused on the process of production of the grapes: from the time of collection from the vine, to the time of packaging and marketing, through the blanching and drying in the riurau. 5 scenes that made up 5 circular dioramas, where the production process takes the first scenic plane, and their respective landscapes or traditional buildings occupy the background of ethnological activity. The work that our team has been developing since 2017 has been to identify and promote the work of cultural communities. The workshop have been carried out thanks to the Cortina family (owner), Massarrojos Cityhall, the civic association Roll de l'Ameler, Riuraus vius, Per l'Horta, cultural association Macarella, B-bila and ACPAHN.


We work together with cultural associations in the safeguarding of heritage, reinforcing the idea that these groups help in the safeguarding of heritage and tradition to a large extent, and a part that tradition itself can be deeply that can be a festive day. In addition, contact with groups enables the expansion of knowledge in all generational strata. Recovering and sharing this cultural heritage, embedded in the memories and life-worlds of the rural areas people, can contribute to reinforcing a sense of belonging to the European common space in different ways: first, sharing with other communities an ancestral tradition; checking the similarities in the forms production traditions throughout the geography and finally giving young generations an opportunity to preserve an anthropological and ethnological process as a cultural community ( intergenerational dialogue). So, an opportunity to raise public awareness and to promote community engagement.