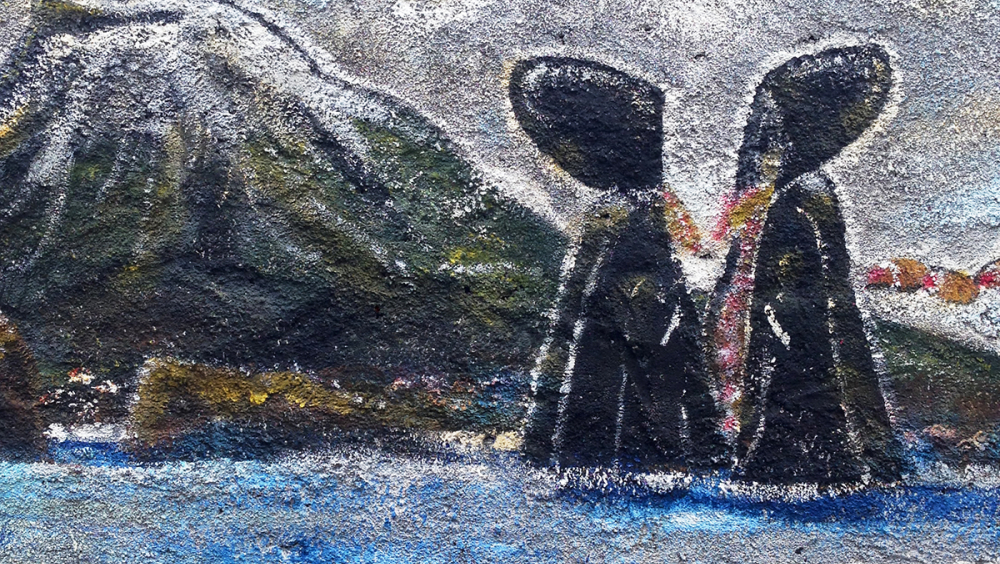 
The Azorean Hood (in Portuguese, 'Capote e Capelo') is a traditional Azorean garment worn up until the 1930s. The hood origin is controversial, but there are some who defend that was brought by Flemish settlers. Over the 15th and 16th centuries Flemish, Genovese, British and French joined the people of Portugal mainland to settle in the Azores islands. The Azorean hood, which was passed down through multiple generations, embedded two economic activities, also brought to the islands by the settlers: it was dyed a rich blue hue from woad and it was shaped with whale bones. The conversion of a whaling industry to a whale watching industry in the Azores in the 1980s is a prime example of how cetaceans can offer value to a community in a sustainable way. Although resistant at first, research indicates that local inhabitants are satisfied with the income that whale watching generates for them and their families and that they feel safer in this new activity. The goal of this project is to create a European Label that will share this Azorean experience through design, including a new version of the Azorean Hood, where the whale bone will not be included but the woad blue dye is maintained and recycled plastic is used. Also, invite other designers to tell creatively their nation's best practices which contribute for the protection of our natural heritage.

The Azorean Hood (in Portuguese, 'Capote e Capelo') is a traditional Azorean garment worn up until the 1930s. Its origin is controversial, but there are some who defend that had Flemish origin. One tends to believe it when confronted with ancient images of the Flemish women wearing similar costumes. People from Flanders settled in the Azores beginning in 1450. By 1490, there were 2,000 Flemings living in the islands of Terceira, Pico, Faial, Sao Jorge, and Flores and because there was such a large Flemish settlement, the Azores became known as the Flemish Islands or the Isles of Flanders. The settlement extended over the 15th and 16th centuries with Flemish, Genovese, British and French joining the people of Portugal mainland in the Azores islands. Besides other cultural contributions, the foreigners introduced woad in the islands. Woad was a yellow-flowered European plant of the cabbage family. It was formerly grown in Britain as a source of blue dye, which was extracted from the leaves after they had been dried, powdered and fermented. The export of this dye plant became one of the pillars of the Azorean economy. Whaling also played a central role in the economy of the islands. The first documentary reference to the capture of whales in the waters of the Azores goes back to the 16th century and the presence of English whalers was documented in the 18th century. The Azorean Hoods, which were passed down from mothers to daughters through multiple generations, embedded these two economic activities, being dyed a rich blue hue from woad and shaped with whale bones.   In Mark Twain's book Innocents Abroad (1869), he makes a 'fashion review' of the Azorean Hood: "Here and there in the doorways we saw women with fashionable Portuguese hoods on. This hood is of thick blue cloth, attached to a cloak of the same stuff, and is a marvel of ugliness. It stands up high, and spreads abroad, and is unfathomably deep. It fits like a circus tent, and a woman‘s head is hidden away in it like the man’s who prompts the singers from his tin shed in the stage of an opera." If Mark Twain would attend one of the many European fashion shows of today, he would realise that the extravagant Azorean Hood perfectly fits the contemporary couture scene.


This project aims to tell the story of the collaboration and cultural exchange between European nations and at the same time contribute towards the enrichment of its cultural heritage through creativity. Respecting democracy and the cultural heritage of all nations, this project hopes to inspire Europeans to protect our natural heritage and to emphasise that the conservation of cultural heritage and its sustainable use have human development and quality of life as its goal. This project has youth in mind as a recognition that the future is theirs, will encourage active participation, cooperation and networking and will use technology in order to enable a broader reach for the smaller communities and provide access for all.