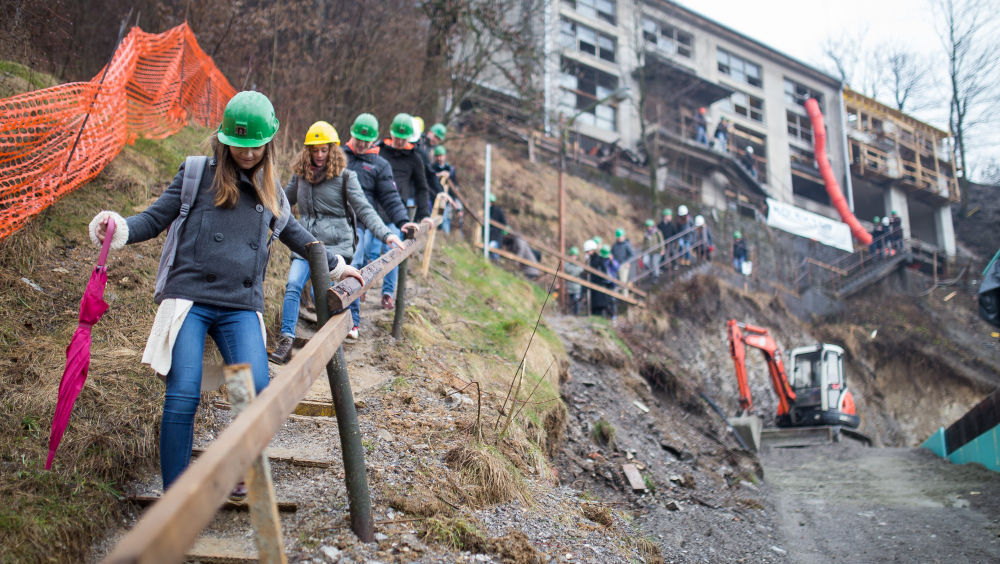 Idrija: How the young are upgrading its heritage


What happens when a young sociologist, a linguist, an architect, a tourist guide and a marketeer decide to rethink the cultural heritage of their small former mining town, nowadays a UNESCO World Heritage Site? The story of Idrija 2020 Association is the story of elevating cultural heritage into new dimensions. It is the story of creating new stories attracting the young and bringing people together. It took place, this story, on a local level, however, it has not failed to encompass European perspective.

It was 2012, and the global economic crisis - that hit Slovenia with a delay - was in full swing. Our student years have been ending and so did our engagement in a local student club. We, young enthusiasts, have successfully transferred initiated projects, such as a film festival, literary evenings, weekend concerts, and know-how to a new generation that was about to take them to a whole new level with new contents and larger audiences. Although we were about to enter the job market and ‘adult life’, we still wanted to contribute to our hometown, a rather small former mining (and today UNESCO World Heritage Site) town of Idrija in the west of Slovenia.

But how to contribute in a meaningful way? How to create an impact?, were thus the main questions that we wanted to address. The five of us, a sociologist, a linguist, an architect, a tourist guide and a marketer, all highly educated and native to this small town, have established Idrija 2020 Association with a mission to tackle the biggest challenge of UNESCO town Idrija: brain drain. We have built on a study with 330 young participants we conducted in 2011. This study identified three main reasons behind the outmigration of youth: 1) lack of jobs that match young people’s aspirations and education (80 % of jobs are in industry, contrary to most metropolitan cities with high shares of services), 2) young people have no place to meet and create their own programme, and 3) municipal (youth) policies do not deal with youth topics and problems.

Starting small, we firstly organised a torchlit night walk to ore smelting plant’s chimney above Idrija (as part of EHD), a Jane’s Walk around Idrija’s hidden abandoned mining facilities, hiding geocaches near little known heritage sites and inviting people from around the world for a treasure hunt… We continued with a series of lectures on social entrepreneurship and innovation, organised a guided tour that lead us 120 metres below surface, straight to the lowest still accessible point of Idrija Mercury mine and a community-building event with former miners and young generations, set on steam-engine pump… To reach a wider audience and connect with decision-makers, we partnered with our younger colleagues from a student club and initiated a “TBI magazine, magazine for the future of the city” - a first youth-run magazine on youth topics. Addressing the outmigration, hidden potentials and initiated projects, the magazine depicted our view of the town, expectations and engagement of young inhabitants. It worked. Our goal was achieved, the local politicians and decision-makers started to listen to us. Our years-long dedication to establish a youth center that would unite the local young population was becoming a reality - the municipality agreed on providing a 150 m2 space and funding for the first Slovenian youth center that would be established and run as a partnership between three different youth associations (students, scouts, and us, the visionaries).

In parallel, we were commissioned to prepare a Youth Strategy of the Municipality of Idrija defining 16 tasks until 2020. These included establishing a coworking space and entrepreneurship programme (established in 2017), temporary housing for young (pilot action with 2 flats in 2017), supporting the youth center (in 2018, 150 m2 were extended to a whole former convent that hosts also a youth-run youth hostel)… TBI, “To Bo Idrija” (meaning “This will be Idrija”) became our header for all projects related to a new vision of UNESCO World Heritage Site Idrija and reached its peak in 2016, when we’ve organised an urbanistic workshop “TBI: Youth, City and Heritage”. The project gathered more than 30 young people from 7 countries worked for half a year on sociological, spatial, economic, environmental and cultural analysis of Idrija and proposed a 3-mission vision for the future of the town in the 21st Century. With exhibitions in former mining shaft, Museum for Architecture and Design in Ljubljana, on the streets of Idrija, and online (www.tbi.si), it became the decades-awaited rethinking of the towns future and strategic orientation. As such it was integrated and expanded in municipal Innovative Strategy of Sustainable Development 2011-2025 that we were co-created after one of our members was employed by the Municipality of Idrija to work on youth policies and long-term strategies.

In our hometown, we have not only participated in providing strategic visions. We have also been active on a practical level. To demonstrate how annual exhibitions of traditional lacemaking (today part of UNESCO’s intangible heritage) can be engaging, modern and attractive to young people, we’ve invited five young designers to work with us on a small exhibition. Each of the designers was given three different music videos, from punk-rock to pop and swing songs, that were the main inspiration for a new lace creation. Set in a small fully-dark cellar, with only 5 LED lights illuminating 5 lace creations and associated music videos on tablets, the exhibition proved that with unconventional ideas and collaboration, traditional crafts like lacemaking can be an attraction - for young and old. The success of our approach and positive feedback lead us to create a new brand of jewelry, inspired by traditional Idrija lace-making. The Idria Lace brand (today known as Idriamant - www.idriamant.si) was created through a collaboration between a young designer and experienced lacemakers. The list of activities goes on - e.g. counting, mapping and analysing traditional miners’ houses and preparing a catalogue of renovation measures as well as proposing new approach to renovation that respects the heritage yet creates living spaces for the 21st century … We’ve received several awards for our work, while in 2014, the President of the Republic of Slovenia awarded Idrija the “Youth-Friendly Municipality Certificate”.

When the European Commission published a call to “re-think local” as part of 2018 European Social Innovation Competition, it made us think: what if we do what we know best in a professional and focused manner? What if we inspire others to do similar things elsewhere? These thoughts gave birth to HeritageLab - a concept for a specialised incubator, where young people create new products and services, based on local heritage. Its mission is to put in practice the European Cultural Heritage Strategy for 21st Century by using principles of creativity, accessibility and digital transformation (in partnership with High Performance Computing-company Arctur). HeritageLab won the European Social Innovation Competition and is currently being prepared for kickoff. After walking a long way, full of small-scale actions as well as strategic planning and initiation of financially sustainable projects, this is where we are now. With HeritageLab we are about to enter a new period - a period, in which we aim to inspire more (young) people, transfer our good practices to other locations and initiate long-term sustainable programmes, bringing heritage from the past to the future.


Despite seemingly very local nature of our activities, we always had in mind the bigger picture. Years before the European Cultural Heritage Strategy for 21st Century we have spontaneously lived it - we, young inhabitants surrounded by cultural heritage, have always felt that cultural heritage has more dimensions - from cultural, social, to economic and environmental. Moreover, for us, cultural heritage was never just ours - it was everybody’s, firstmost it was of miners and mining families of Idrija, but it was also numerous scientists and engineers coming from Central Europe to work in Idrija, of people of Almaden (Spain), of Monte Amiata (Italy), of Luis San Potosi (Mexico), of Banska Stiavnica (Slovakia), of Vienna (Austria), of Trbovlje, Zagorje, Jesenice (Slovenia), of all the mining towns in the world, of mercury marketplaces such as Amsterdam and Antwerp, of ports of Trieste, Genova, Malaga and Cadiz, of those that experienced the destructive power of mercury such as Minamata (Japan) …It is of everyone on the world.

Idrija’s heritage is unique, but integral part of common European and world heritage. Our heritage of mercury made possible the Baroque, the rise of European banking, advancement in alchemy and later chemistry and physics, new discoveries in medicine and botanics, and development of European capitals, but also led to enslavement and annihilation of several indiginous tribes and nature exploitation of Americas, destroyed thousands of miners’ families, and left a dark stain on nature. When one sees its cultural heritage in this light, one becomes a humanist, an European. We acknowledged this in all of our activities - by inviting people of 7 nationalities to shape the vision for this small town, by featuring foreign lacemakers in our magazine, by linking lacemaking to great traditions of textile industry in the north of Italy, by including groups of all backgrounds, especially minorities and people with disabilities ...