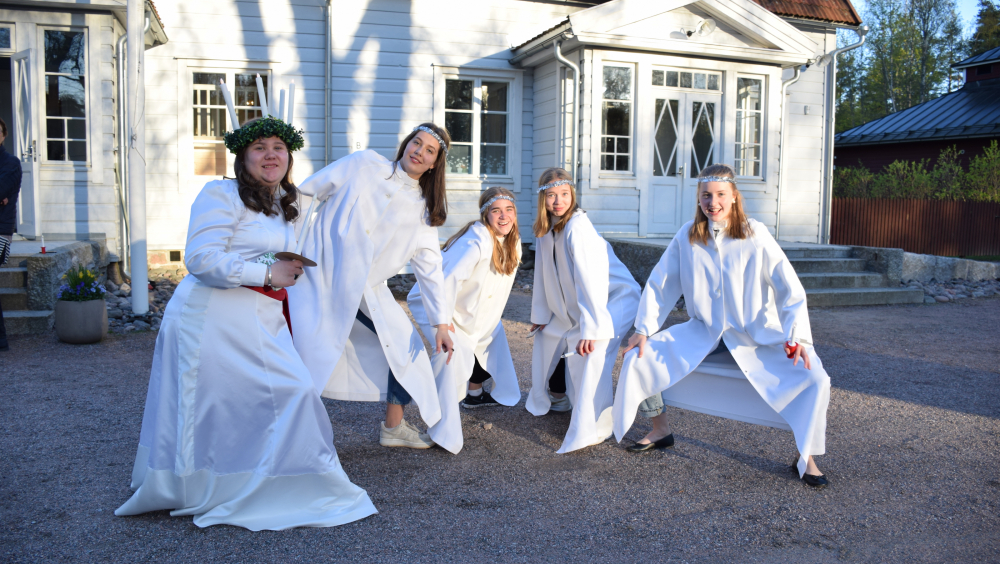 
Heritage Hubs was a two-year project related to the European Year of Cultural Heritage 2018, co-funded by the Creative Europe programme of the European Union. The project’s purpose was to support and make possible transnational learning from and about cultural heritage, to allow children and young people to define and voice what they regard as important cultural heritage, and to increase respect for the cultural heritage of others. Heritage Hubs brought together 10-16-year-old children and young people from Finland, Serbia and Spain to share examples of their cultural heritage via digital platforms and to interpret the cultural heritage of others in face-to-face interaction at home and abroad. This approach provided the pupils with an opportunity to discover cultural similarities and common values at European level, and to recognize other uniting factors stemming from shared European backgrounds. Commenting on the benefits of the project to the pupils, teacher Ingelisa Wikholm (Winellska skolan, Finland) explained: “The pupils noticed that one can also enjoy the culture of others and that cultural heritage is something common to humanity even though it may seem different on the surface.”

In Heritage Hubs, children and young people in Finland, Spain and Serbia were encouraged to familiarize themselves with their own cultural heritage, to express what they regard as important cultural heritage, to share this heritage with their peers, and to interpret and practice the cultural heritage of others. Heritage Hubs school pilots were organised at 11 schools in Finland, Spain and Serbia in 2018-2019 during two main phases. In Autumn 2018, the participating pupils produced videos and other digital presentations of their chosen heritage. Video production made it necessary to think about how to present and express their own heritage. The production process created a multidisciplinary and multimedial learning experience crafted by and representing the participants’ own expertise, agency, and creativity. Their videos show, for example, traditional foods still enjoyed today; exploring the history of the Spanish language in Suso monastery; the tranquil nature of a Finnish bog; the Roman ruins of Felix Romuliana; preparations for slava and sauna; traditional dances in La Rioja; and playing mölkky and floorball. Their choices demonstrated that cultural heritage is contemporary, living, versatile, renewable, and has transformative powers. They also well illustrate the types of cultural heritage that young Europeans regard as important to them. The second phase, in Spring 2019, was about experiencing, interpreting and presenting the cultural heritage of others during exchange visits. Hosting pupils and families were all eager to show their own culture, heritage and way of life to their guests. There were indeed repeated expressions of positive pride amongst Heritage Hubs pupils for their own cultural heritage, and a grasp of the importance of being able to share that culture and heritage to others, whether online or in person. The pupils were particularly fascinated by each other’s environments and cultural practices: swimming in 8 °C lake water, waking up with the dawn light at 5am, visiting a classroom that is actually a kitchen in a school, removing shoes when entering a house, staying up until midnight during the school week, eating lunch at 11am, or, conversely, eating lunch many hours later. The pupils also discovered common roots, shared cultural backgrounds and uniting factors at European level. Spanish pupils and teachers were surprised by the cultural similarities (i.e. classical Greco-Roman traditions) Spain shared with Serbia – a country about which they knew almost nothing. All agreed that their preconceived ideas about Serbia, which they thought of as a country at war, changed radically in a positive way. Similarly, Finnish and Serbian pupils were surprised to find so much common ground in the countries’ relationships with Czarist and Soviet Russia, evident in anecdotal history, museum exhibits, and even personal memorabilia in homes. Feedback from Heritage Hubs participants indicates that socializing with different nationalities and experiencing diverse cultural heritage was a powerful experience. It activated participants’ cultural emphaty and adaptability, which was in turn strengthened by the experiences. Participants reported overcoming many pre-existing cultural prejudices, and increased respect for their peers and their culture and heritage. The experience of interpreting heritage during the school visits was overwhelming and emotional for the pupils, teachers and project staff alike. “It shocked me. I didn’t think they would do it so big and the whole school was part of it. It was really nice” said one pupil, explaining how it felt to experience her own Finnish-Swedish heritage, Stafettkarnevalen, presented and interpreted in Grocka, Serbia. The whole process of getting to know, interpreting and sharing heritage was a massive learning curve during which the pupils – and teachers – learnt a lot about themselves and their own cultural identities through learning about cultural heritage and practices in other countries. Teacher Laura Pérez (IES Villegas, Spain) believes that Heritage Hubs aroused interest in cultural heritage not only among participating pupils and teachers, but also among their families and neighbours. As a consequence, cultural heritage became a new link between pupils, teachers, parents and the wider community, both local and from further afield. This communal and social aspect of cultural heritage was one of the most remarked on experiences of Heritage Hubs amongst the participants. They enjoyed exploring cultural heritage together, sharing heritage and learning about cultural heritage from each other – whether locally, nationally or internationally. Encounters with older generations (grandparents, community elders etc.) and heritage practitioners, and “learning their trade”, as well as networking with other schools provided depth and context to the experience. When children and young people experience heritage themselves, they are also more likely to appreciate it and take responsibility for its maintenance and preservation. In addition to these valuable personal learning experiences, Heritage Hubs is also producing numerous lasting tangible outputs. One of the main objectives of Heritage Hubs was to propose a transnational and cross-cultural heritage education methodology, that provides sustainable results and long-term effects in the field of heritage education throughout Europe. This methodology is applied throughout the Heritage Hubs Manual for Cultural Heritage Education, which includes tips and practical ideas how to implement heritage education at local, national and European levels. Based on participant feedback, experiences and data collected during project implementation, we also drafted recommendations for cultural heritage education. These recommendations will hopefully give education and heritage professionals ideas about how best to integrate cultural heritage and intercultural dialogue into their daily work, to make cultural heritage accessible and inclusive, and to promote the agency of young people in cultural heritage processes. Heritage Hubs pupils own presentations of cultural heritage shared on the project’s YouTube channel will also remain available to be utilized in teaching or merely just to be watched and enjoyed. The project was coordinated by the Association of Cultural Heritage Education in Finland in partnership with La Fundación San Millán de la Cogolla in Spain, the Centre for Urban Development in Serbia, and VITECO E-learning solutions in Italy. Contact: Association of Cultural Heritage Education in Finland Hallituskatu 2 B, 00170 Helsinki, Finland https://www.kulttuuriperintokasvatus.fi info@kulttuuriperintokasvatus.fi Urban Development Centre Perside Milenković 1, Belgrade, Serbia https://www.udc.rs office@udc.rs Fundación San Millán de la Gogolla Plaza del Convento s/n, San Millán de la Cogolla, La Rioja, Spain www.fsanmillan.es/ fundacion@fsanmillan.es