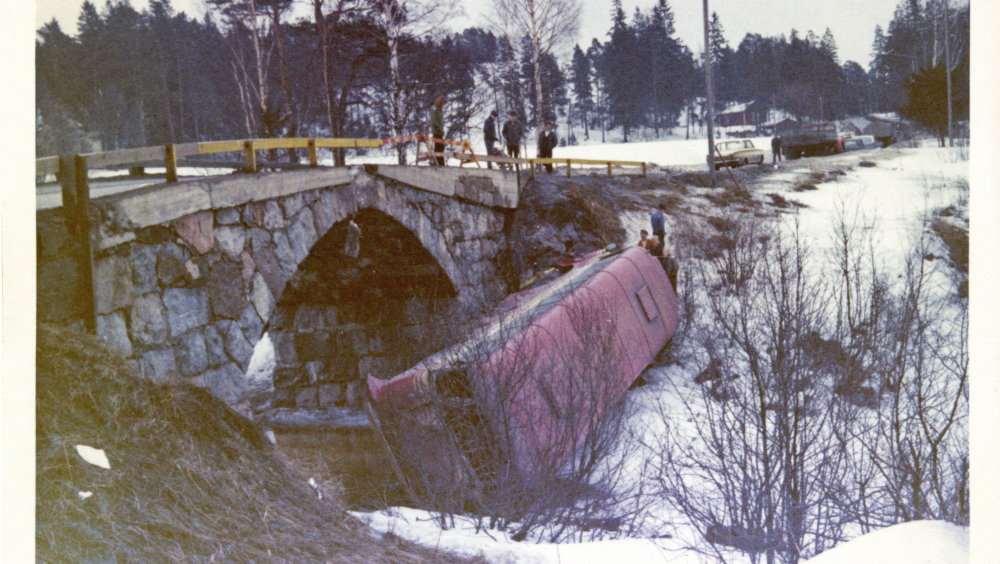 
There is a small rocky hill called the Stenkulla rock, in Jokiniemi in the present city of Vantaa in Finland. The Stenkulla rock has been in its place for thousands upon thousands of years, seeing everything that has happened in its surroundings during that time. There have been people from all around Europe at the Stenkulla rock since the Stone Age. Every now and then they have abandoned their settlement and nature has taken over for a while, but the humans have always returned. Now there are some apartment buildings and row houses by the Stenkulla rock. There is also a decade old stone bridge depicting the ancient King’s road running through the area. Through the years many archaeological excavations have been conducted in Jokiniemi that have proved Jokiniemi has many historical layers. The Stenkulla rock is now sharing its story to everyone who is interested in hearing it.

There is a small rocky hill called the Stenkulla rock, which is situated In Jokiniemi in the present city of Vantaa in Finland. The Stenkulla rock has been there for thousands upon thousands of years, seeing everything that has happened in its surroundings during that time. It has seen the changing climate since the melting of the ice after the last ice age. It has also seen various human populations speaking different languages and inhabiting the area nearby. In the Stone Age the Stenkulla rock was a coastal area. Seals liked the rock and there were lots of fish for them to eat in the surrounding sea. The first humans to come were a small group of hunters and gatherers following the seals. In the beginning they moved around a lot and didn’t stay in Jokiniemi for very long times. But as the years went by they realized Jokiniemi was a very good place to live, so they built a small village there. After a couple of thousand years the water level had sunk, and nature pushed the seashore further away from Jokiniemi. There was only a narrow river left. The people depending on fishing and seal hunting were forced to move and had to abandon their former home by the Stenkulla rock. Nature and animals took over the former village with the decaying houses. For many hundreds of years Jokinemi was a home for foxes and other small animals. But at the end of the Stone Age a new group of humans arrived at the foot of the Stenkulla rock and built themselves a house. These people lived there for a couple of hundred years before the site was abandoned again. After the ending of the Stone Age Jokiniemi stayed abandoned for almost 2000 years before newcomers from Sweden moved there in medieval times. The swedes settled in the surrounding area and built an important road through Jokiniemi. As the road passed the river, they had to build a bridge over it. The people in the nearby village weren’t very eager to take care of the road and the bridge. As a priest travelled over the bridge in the 17th century the bridge was in such poor condition that it broke down and the priest’s carriage fell into the river. The priest made it, but his horse drowned. Later the humans created carriages that could move without horses, they called them cars. But although the old wooden bridge had been updated to a stone bridge in the late 19th century, it hadn’t been planned for cars. There were many car accidents before a new bridge was built especially for cars and the old bridge was left for people walking or biking. There have been people around the Stenkulla rock since the Stone Age. All the people have had stories to tell. Every now and then they have abandoned their settlement and nature has taken over for a while, but the humans have always returned. Now there are some apartment buildings and row houses by the Stenkulla rock. The decade old stone bridge depicting the ancient King’s road running through the area is still there. Through the years many archaeological excavations have been conducted in Jokiniemi and archaeologists have found traces of people living there thousands of years ago. Nowadays there is a small archaeological park at the Jokiniemi site. There are small stone pillars marking the Stone Age sea levels and an info board which tells about the history of the place. Since the opening of the park in 2017 the local communities Vantaa-Seura and Lions Club Tikkurila have arranged a European Heritage Day -event at the Jokiniemi site. Local people have had a chance to learn about the history of the place and take part in guided tours. Archaeologist Andreas Koivisto and artist Tom Björklund are currently working on a children’s book about Jokiniemi and the Stenkulla rock. You can read about the book project in Swedish and Finnish in Andreas’ and Tom’s blog Stenkullaberget.


People have lived in Jokiniemi since the Stone Age, and they have come there in several waves from all over the Europe. Recent DNA analysis show that we have common ancestors all around Europe. The Stenkulla rock has witnessed all the phases: the wandering Stone Age hunters, the villagers who finally stayed, the travelers, salesman, bishops and messengers who travelled among the King’s road, the multinational Swedish and Russian military troops from the medieval and historical times and lastly the people living there today. Archaeologists have found Russian, Baltic and Scandinavian flint and amber from the site and this also proves an ancient, common and shared history with the recent neighbors of Finland. Even today people come to live in Jokiniemi from all over the world as Vantaa is one of the most multicultural cities in Finland.