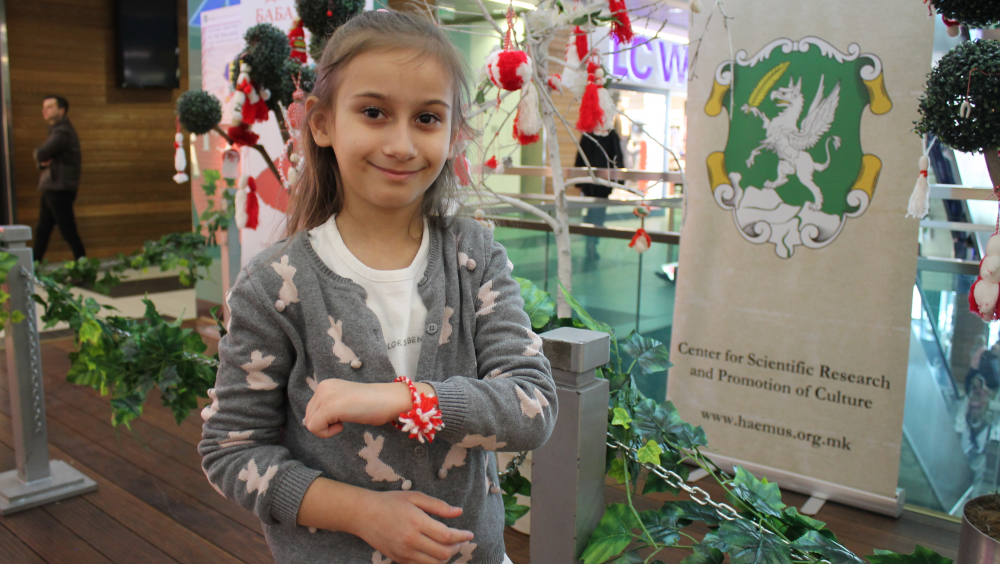 
The “Grandma March Day” is a traditional manifestation created by HAEMUS in 2013/2014 to support the successful multinational UNESCO application in order to celebrate the custom “Martinki”. During the celebration, followed by positive wishes, people give as present red and white amulets to their beloved ones. We took a vow (signing the legal support too) that morally and ethically we will keep the knowledge on tradition and multiculturalism safeguarding the cultural practices associated with the 1st of March. The real storytellers are people who are practicing this custom, and as an organization, HAEMUS is providing them with a place and space where they tell their own stories, transmit and share their experiences and feel like home.

Since 2013, the cultural practices associated with the 1st of March were proposed to be protected as intangible cultural heritage with the multinational application to UNESCO submitted by North Macedonia, Romania, Bulgaria and Moldova. On this day typical red and white tassels, pom-poms or knit (braided) bracelets are exchanged and they are worn pinned on clothing or tied on the wrist. The hand-made amulets are known by many names as Martinki (Мартинки) in Macedonia, Mártenitsa (Мартеница) in Bulgaria, Mărţişor in Romania and Moldova. They are associated with the beginning of spring, when these small artifacts made of the red and white woolen thread containing a message with good and positive feelings and expectations, is given to the beloved ones. People wear them until nature starts to bloom and then hang them on trees. As an organization deeply engaged in Balkan heritage, we didn’t hesitate much when we got a request by both the Cultural Heritage Protection Office and the Institute of folklore, to support the UNESCO application as a legal safe guardian. For this purpose, at the beginning of 2014, we created the “Grandma March Day”, which become a traditional manifestation in order to protect, educate and popularize this custom. In 2016 we initiated the cross-border partnership with our colleagues from Bulgaria and Romania with the main aim to promote our common heritage. Within this project, we designed the series of travel events comprised of many elements and shaped as an exhibition, to show the unique, but still a multinational character of these cultural practices. A lot of these elements, like the multilingual educative panels and original amulets from three countries, stayed in our archive, which we exhibit during the subsequent events we organize, shaped with a lot of natural elements like trees and flowers and supplemented with a bazaar of handmade martinki and creative workshops for children, as an added social interactive value. With time, our manifestation grew up from several hundred people to more than 10 000 visitors. This gives us an opportunity to start a conversation with most of them and make an audio or video recording, while paying attention to everybody’s memory and inspiring communities regardless of their nationality, religion, gender or age, to talk about their own memories and experiences. We also encourage the visitors with the first-hand experience of the heritage, by enabling them to make martinki by themselves. Our goals to preserve, preserve and promote this cultural heritage are especially achieved through special workshops with a focus on children of pre-school and school-age, carefully created and designed to help them visualize and express the knowledge of tradition and multiculturalism. We are very proud that we preserved a tradition from oblivion. Unlike other countries like Romania, Moldavia, and Bulgaria where martinki are national pride, this tradition was almost dying in Macedonia and was practiced only by elderly people within some families or communities. Now we take a step further, to show that this small amulet made of red and white woven thread, bringing joy and happiness to everybody on the 1st of March, deserves to be wider promoted in all of its shapes and variations, as an important part of the European common history and heritage.


It is the story where people by their own choice, regardless of nationality, religion, gender or age, through practice, large social inclusion and interactive approach, educate, share and transmit the European Intangible Cultural Heritage.