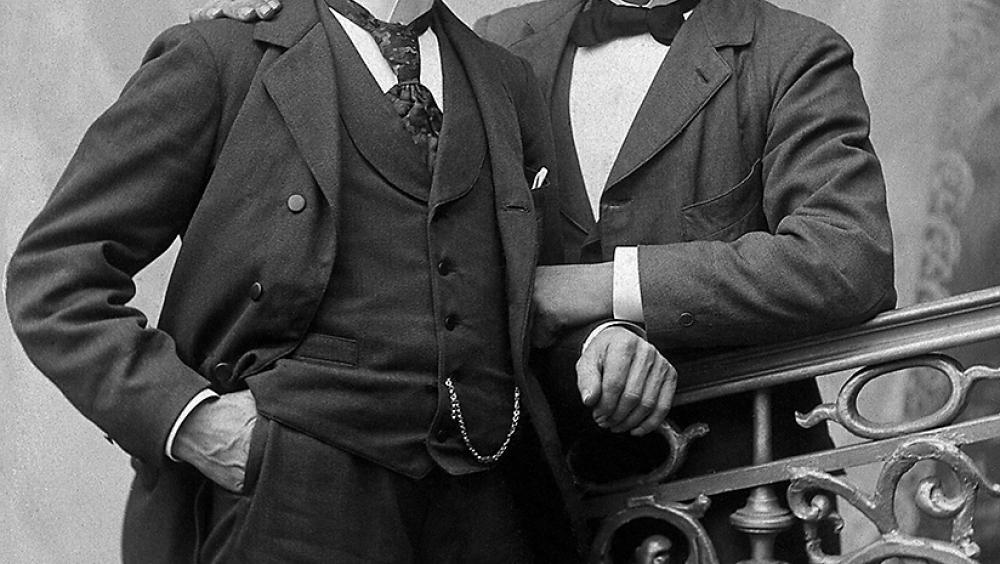 
The farm boy Fridolf Johansson travels from his home in Vårgårda to Hillefors where he becomes a mill owner with a large family, factory director who runs a small oatmeal factory which, not least during the Second World War, is an important part of the food supply. His children and grandchildren continue to run the mill and after about 100 years it becomes a museum of the childhood of industrialism.

Fridolf Johansson was a farmer boy from the farm Hjultorp in Vårgårda. He had got a job as a carpenter's apprentice in Gothenburg and often traveled by train that passed Hillefors in Stenkullen, where there was a saw that was driven by a water turbine.

He had heard rumors that the saw was for sale. One day he took courage and got off in Stenkullen and there met the owner of the saw Andreas Andersson. He had incurred large debts by first buying the land and a waterfall where the sawmill was to be built. He wanted to build this and a dam but was forced by the water court to buy an eel coffin wall that would end up under the water when the dam was built. Then build the saw, install a water wheel, build a dwelling house and outbuildings. After a few years, he replaced the water wheel with a turbine that gave much more power. All this had cost more money than he had expected, so he looked for a partner who could invest in the company Hillefors saw.

Fridolf Johansson, who had grown up on a farm near Vårgårda oatmeal mill and had gained knowledge about how to make oatmeal. Here he saw a saw that had a turbine capacity to also operate an oatmeal grinder, so in 1898 he became a partner with Andreas Andersson and the saw was expanded with an oatmeal grinder and a bone stamp.

In 1902, Axel Fridolf married Anna Olsson, one of six daughters on the farm Hunstugan, from which the mill's land was once demarcated. They moved into the house and had eight children. A fatal accident occurred in 1904 when the fire guard Karl August Johansson at the steam boiler was badly burned when he fell asleep on his guard and only woke up when the safety valves had tripped. He was taken on the night express train to Sahlgrenska Hospital in Gothenburg, where he died of internal burns when he inhaled the hot steam.

Andreas Andersson sold his part of the company in 1905 to cantor F. E. Edgren. Before A.A. had time to move his equipment a planer and saw frame, a fire occurred which burned down large parts of the mill.

The mill was rebuilt, but this one also burned down in 1909. At that time, cantor F. E. Edgren sold his share to Axel Fridolf s brother Carl Johansson. That Axel Fridolf did not give up then indicates a rare stubbornness, he may, however, have been proven by the fact that brother Carl came into the business. They could now, with joint efforts, build the mill in brick.

The new mill, which was a four-storey brick building with completely new equipment, was completed in 1913 and fortunately the turbine house, saw and steam boiler had survived the fire.

During Axel Fridolf 's time, the mill developed into a small industry that employed six to seven people and there were many Stenkullen residents who periodically worked in the mill. Through their marriage to Anna from the nearby farm, the brothers were also able to use the farm's resources. Axel Fridolf and Anna made sure that the children received a good education. Olof, Stellan and Holger all went to the Gothenburg Trade Institute and the girls received different educations. All the sons had to help with the work in the mill, but it was Olof and Stellan who worked as mill workers full time. Influenced by the politician Karl Staaf, Axel Fridolf became politically involved at an early stage and also sat on the board of the Scandinavian Bank.

During the 19th century, oats were grown extensively in western Sweden and, among other things, exported to England as food for all horses in London and other cities. With the motorization of transports, the need for horses and oats decreased. Using oatmeal, which with a few minutes of cooking turned into a nutritious porridge, became a very common and cheap breakfast in Sweden.

The farmers who lived in Lerum and in other parishes such as Stora Lundby, Skallsjö, Hemsjö, Ödenäs, Angered, Bergum and Vårgårda drove their oats to the mill. It happened that there were up to 29 horse furrows in line to grind. They often brought oatmeal back with them immediately and also the peel which had been ground down to oat bran. This procedure was common during the First World War (1914-1918) when there were difficult times in Sweden with, among other things, famines such as the Bread Uprising, May 1917 in Gothenburg.

The mill employed six to seven people during the time Axel Fridolf and his brother Carl ran the mill together. Axel Fridolf's sons helped during the holidays and after graduation they worked more or less full time in the mill.

The working time in the mill was long, 12 hours was not unusual. Every night the stones checked that no flames were burning. There were suspicions that the fires that had ravaged 1905 and 1909 were caused by sparks from the millstones. When the oats fell down between the stones, other objects such as gravel and perhaps some iron object could follow and then there was a risk of spark formation. After 10-15 hours of work, the millstones were very hot, which could mean that there was a dust explosion which in turn caused a fire.

In November 1923, the biggest floods came to human memory in western Sweden. Lake Mjörn rose by 70 cm and Göta älv flooded its banks. In Säveån there was also major damage, the dam and bridge at Hillefors partially collapsed. This meant that the water took with it parts of the dam and the bridge, but the mill was still able to continue its production. Axel Fridolf and Carl then moved the entire dam facility downstream and were thus able to extract more hydropower. From the beginning, they had a fall height of 2.22 m, but as they moved the dam, they were able to extract power from a fall height of 2.65 m.

The mill business got a big boost during the Second World War when Sweden was again isolated from the outside world. The country's own resources of grain and other products that were grown became very important to take care of. Rationing of, among other things, oatmeal was introduced in 1941 and lasted until 1948. During this time, the mill was stationed at war and served under the crown between 1944 and 1947. Everything that was then produced in the mill went to the crown.

In the mill, both two- and three-shifts were worked for a long time. Olof worked half the nights and his brothers the other hours. Many stone hill dwellers also had their livelihood in the mill. On the way out to the steam boiler was a large table where 50-kilo sacks of groats were poured up as employees poured into bags and packages. Axel Fridolf supported quite a few in the area during the war. The groats were manufacturers and it became a social distance to the rest of society.

In Hillefors grynkvarn there were no opportunities to grind the oats, but by collaborating with Ölslanda mill, which was located downstream of Hillefors, the oat kernel could be ground down and made into oatmeal or oat must. Steam-prepared oatmeal was thus steam-prepared oat kernels ground on rollers that passed through sieves and wheelchairs.

During the 1950s, the millstones were replaced by a slung peeler. The peeled oats were more efficient, the oat kernel fell down and the oat shell was blown up one floor where it later fell down to the hammer mill which broke the shells into oat bran. A packaging scale was also acquired in the 1950s. It was packaged in a single kilo package and handled by one person. The steam dryer was rebuilt to provide a more even drying of the oats.

In 1954 Axel Fridolf Johansson died and after the estate register, where the inheritance was divided, a large part of the company's working capital went to the eight children, which may be one of the reasons why the mill was not modernized more than what was done.

The eldest son Olof took over the mill. The mill was profitable and had many large customers. Olof, married to Elsa, had three children: Lars, Bengt and Margareta. The sons were allowed to help in the mill with all sorts of chores while growing up, but it was their son Bengt who started working in the mill after military service in 1962.

Bengt worked in the mill full time with his father. Then also worked the miller Knut who came to Hillefors in 1920 and remained until 1968, when he moved to the old people's home for reasons of age. The mill worker Gösta Nauclér began in the 1930s and worked until 1981. During the 1980s, competition had intensified. The large business chains such as ICA and Vivo only bought large quantities and Hillefors could not deliver this. Most were sold to wholesalers in Stockholm, Gothenburg and Skåne in fierce competition with the large mills.

In 1984, Olof died after a long period of lung problems.

Gradually, the mill's finances deteriorated and Bengt could only afford to have a part-time employee.

The facility had significant age problems and he saw no other solution than to sell it to Lerum municipality. He had great love for the mill and wanted it to live on as a museum through Hillefors Grynkvarns Museiförening, where he was a board member.

It was Lerum municipality that bought the mill. The municipality was most interested in the power station which they handed over to Lerums Energi AB, a municipally owned company. They rebuilt the power plant and the dam hatches into a small modern local power plant.

Hillefors Grynkvarns Museiförening, formed in 1985 and leasing the mill building, they soon began with tours of the mill, which for a few years was a living museum when the mill was still drivable. In 1990, it became a building monument due to its high cultural-historical value. A few years later also a working life museum.

The association showed the mill to the public on special mill days and in the meantime they renovated it. The turbines, turbine house and mill gutter were very dilapidated and have been completely renovated, including money from the National Heritage Board. In 2022, it is estimated that the mill machinery will be able to spin again and the mill will become a living museum over the early era of industrialism. However, renovations are not finished. In order to make oatmeal, it is necessary to be able to steam the groats before the pressing and the steam boiler that is available has been condemned and must be replaced with a new one, although not everything is complete.

The association now plans to have regular opening hours during the warmer seasons and at certain times other parts of the year. It then remains to solve the staffing problem with non-profit staff and / or employees.

In 134 years from 1888, when the land, rapids and an eel coffin were bought, the facility has been transformed from a carpentry workshop into an oatmeal mill that has been run by three generations of grocers into a museum showing an industry from the childhood of industrialism.